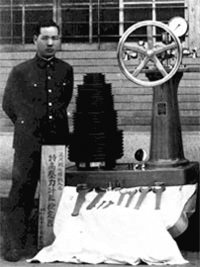 In the early 19th century, measuring of pressure became necessary as steam engines were developed. Mr. Bourdon, French’ man applied for a patent for his invention of a method to measure pressure using a curved tube whose cross sections were oval shaped in 1849. Mr. Schaffer, a German, was granted a patent for his method of measuring pressure using a steel diaphragm as an elastic membrane. In Japan, production of pressure gauges was started around 1897 by referring to foreign-made gauges. The demand rapidly grew in the Taisho era but it was mostly imports that filled this demand. It was around this time the Weights and Measures Law was applied to pressure gauges so that no pressure gauge could any longer be used without passing a certification test.
Pressure gauges were included in No. 118 of the Japan Industrial Standard in 1930. JIS B 7505 Pressure Gauge was established in 1953. Our company, called Migishita Kyodai Keiki Seisakusho at the time, was granted an approval of the Minister of Trade and Industry to register its pressure gauges in 1919. The company went into full-scale business in 1936 when it was reorganized as Migishita Keiki Seisakusho Co., Ltd. It concentrated its efforts in overseas markets and exported the products to China and South East Asia. During the Second World War, the company’s specialized technology was so valued by the military that its factory was placed under control of the Navy. Branch factories were quickly established in foreign cities such as Shanghai, Fengtien, and Beijing, however, these factories were closed and requisitioned immediately following the end of the war. In 1948, the company was faced with financial difficulty and forced to temporarily stop operation of its factories.

The company was restructured as Toyo Keiki Co., Ltd. in 1949 and strived to rationalize the operation. In a few years that followed, the company’s production volume grew to be largest by far among the competing companies. In 1950 the company saw another organizational change. This time each of the branch factories was established as an individual corporation and one of them started under the new name of Migishita Seiki Mfg. Co., Ltd. Ever since then, we have been striving to meet customer needs with strong awareness of our responsibility for quality improvement and new product development. (Partially reproduced from “Keiryo Hyogo.”)